....been more sad about being barren as i am right now. TAKE A LOOK AT THIS THING!! 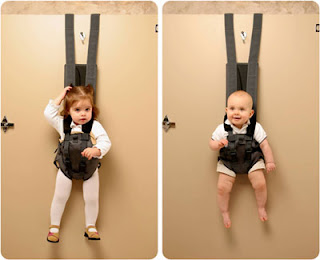 its called the baby keeper. you hang it over the bathroom stall door and it suspends your kid 3 feet in the air while you drop a deuce!
i swear... the second i have a kid in my life im gonna walk.... nay, im gonna RUN...to the store to buy this so i can continue my new commitment to no-shame-pooping!
(i wonder if they sell a package-deal that comes fully equipped with a baby inside. *fingers crossed!*)
Posted by Jersey at 9:03 AM 8 comments: 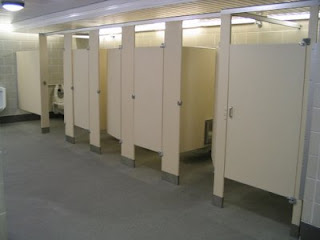 man, it feels good to be back. like most folks, i have been traveling like cuh-ray-zee for the holidays and sadly i didnt have access to the internet while i was away. i have enjoyed spending the last few days getting caught up on everyone’s good (and sad *sigh*) news. *cyber hugs for all*

i thought about dedicating my first post of the new year to a list of things im looking forward to in the 360 days to come.... but that would be positive and optimistic and cheerful and then you all might think that barren lesbo was abducted over the holidays and this hack blogger is simply an impostor trying to infiltrate the TTC community (yes, im a conspiracy theorist. humpty dumpty was pushed.) so.... i decided to keep it real and start the year off right.

ok... first gripe of 2010... the use of the title “feminine hygiene products” for the section of the store that contains tampons and pads. “feminine hygiene”? seriously? as though our period is some dirty little habit that needs to be sanitized before it can come out and play safely with others. it should be called “female necessity products” or something less related to salad bars and subway benches.

next gripe... what is with the friggin cost of a box of tampons?? i mean come on! why is it that i can spend $1.99 on an ENTIRE MEAL (read: bun, beef, cheese, ketchup, pickles, onions, freedom...err, wait, bush is gone so i can say FRENCH fries, and 16 ounces of high fructose corn syrup) but i have to practically spend $12.00 on a wad of bleached (read: unhealthy for the vajay-jay) cotton and a dry ass cardboard applicator? and why is it even called an “applicator”? it doesn’t “apply” anything. it should be called an “inserter”, damnit.

in 1978 gloria steinem wrote a piece for ms. magazine titled, “if men could menstruate”, where she playfully imagines how the culture around menstruation would change if men (the holders of social and political power) were the ones who bled every month. she argues that men would brag and boast about how long and how much they bled… even creating slang like “im a three pad man”. she argued that men’s menstruation would result in federal policy making all tampons and pads free.


i totally agree with her and in fact, i believe that menstruating men would never ever believe that bullshit we were told about only producing “2-3 tablespoons of blood during a menstrual cycle”. who are they fooling with that crap?? i swear, teenage menstruation manuals must have been written by buffoons because any woman knows that 2-3 tablespoons is total BS.


i want to yell, “listen, buddy. while your penis-wielding-ancestors were out there getting jobs and voting, my female ancestors were handcuffed to the kitchen. which means we became pretty damn good at approximating the size of a tablespoon. and after years and countless months of bleeding i think i might have a slightly better idea than you do about how much bleeding i do.” grrr. and to think they have the nerve to tell us, “it might seeeem like more than 2-3 tablespoons but trust us, its not”.


next gripe…female shame. wtf...women act like natural bodily functions are something for us to be ashamed of! and relax… im not about to go all second wave, flower-power, monthly-bleeding-is-a-beautiful-symbol-from-the-mother-goddess-of-your-fertility, on you. i am, after all, the barren lesbo. key word being barren.


all im saying is that i am sick and tired of the ways that we as women lower our voices when asking to borrow a tampon from a friend or do the secret drug transaction handshake when passing a pad across the table at a restaurant.

if men could menstruate they would let tampon strings hang proudly out of their back pockets… would puff out their chests and say, “shit bro… can i bum a rag off yah” *grabbing crotch and spitting* then they would saunter off to the men’s room and take care of business with their foot up on the urinal…. proud and public and for all the other men to see.

in fact, im surprised to hear that men’s bathrooms even contain stalls at all. men seem to brag about bathroom related topics all the time. “you should see how good my aim was!” or “man, i just dropped the kids off at the pool”. we women on the other hand are supposed to walk through this world acting like we don’t bleed and we certainly don’t poop. good lord, anything but that!

im amazed at the lengths we go to in an attempt to disguise what we do behind a closed bathroom stall door. seeecretly opening the tampon rubbish bin…careful not to rustle the paper bag which might notify all other patrons in the bathroom that we are in fact, bleeding. *gasp*someone get her some “hygiene products!”

we act like bandits trying to secretly open the bank safe without setting off the alarm alerting the female shame police. we painstakingly (and using only the veeery tip of our pinky finger) struggle to push open the lid… praying that the hinges on the receptacle are greased enough to allow for a totally silent deposit of our “waste”.

the best public bathroom experiences are when we find ourselves 100% alone in a bathroom… nothing but vacant stalls as far as the eye can see. finally, after hours of holding in farts, we have the chance to free ourselves…. to drop our own kids off at the pool for a change. when suddenly… *gasp*… the stuff that nightmares are made of… the scrape of the main door, followed by the click-clack of women’s heels. we are no longer alone. we begin to sweat as we frantically try to figure out an exit strategy…

im sure she just has to pee… ill wait her out.
but what if she has to poop and decides to wait me out?
we could be in here for hours, waiting each other out.
if i take too long, the people at the table will for sure know that i came to the bathroom to poop.
then ill be forced to make up a lie, “aww, heck. those gosh darn lines in women’s bathroom” *forced roll of the eyes, cough*
no, ill just skip pooping and try to go again later
but what if i get back to the table and cant hold it? i certainly cant go to the bathroom TWICE in one dinner service! people will think i have to poop!
shit, what am i gonna do?!?

last week i was in a public stall peeing… hey, i swear, i was only peeing!... when a woman came in and sat in the stall next to me. apparently my stream of pee must have found the magical harry potter black hole because suddenly it stopped making the traditional pee-touching-water noise. there we were, in. total. silence. me suspended above the shitter silently peeing and panicking that she might think im trying to poop. i took a slight step forward and the sound returned to the water bowl. *wiping my brow* whew! disaster averted.

but then suddenly, i heard a strange noise next to me. a sound that i have never heard in a public restroom before. a straining of sorts that bordered on a full-fledged grunt. and then it happened… like the kick of a loud base drum… PLOP. followed by a beautiful concerto of ratta-tat-tat-tat and another plop.

that’s when i realized… holy crap (literally) this woman is totally pooping next to me... with no shame.

so from now on i vow to use my grown up voice when asking to borrow a tampon… to open and slam the tampon receptacle with pride but only after actually depositing waste in there… to toot and grunt and refrain from masking plop sounds with synchronized coughs.