the post where i whine about making a portfolio 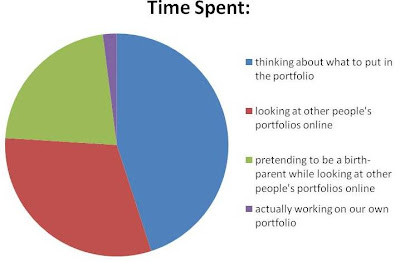 update: NM and i have cleared all of the hurdles for adoption and now only have two... count em, TWO things on our to-do list. first, we need to get our shots finalized. im still not too clear on why they need to know my hepatitis status. would they not allow us to adopt if it turned out that we were positive?? if so, i thank my lucky stars again that the crack head nurse didn't give me hep. (btw...she is currently doing like 20 years in jail!)

the other remaining item on our to-do list is the portfolio. *deep sigh* what a monumental task this has turned out to be. *wiping my brow*
i remember in our veeery first adoption meeting like 2 years ago, we were told that we would "get the opportunity to make a portfolio" that included details about our family, home, hobbies, values, etc. this portfolio would then be shown to potential birth-parents as they (typically she, but sometimes they) try to select adoptive parents. being the total craft freaks that we are, NM and i immediately got SO excited about making the portfolio. my little artist brain started thinking about all of the potential formats, colors, fonts and photos that we would use. i couldn't WAIT until we got the green light to go ahead and start making it.
until
we actually got the green light to start making it.
suddenly "get the opportunity to make a portfolio" felt more like "have to force yourself to sit down and make a portfolio whether you like it or not".
im not sure if this sudden aversion to making a portfolio is common with other adoptive parents but i just cant get past how unexpected this feels for me. and lets not even talk about the process of writing a letter to the potential birth-parent. fu'getabowtit.
in our defense, i should admit that we are more than half way through the portfolio. i feel like the further we get into the process though, the more final the decision feels. at first, playing with colors is just that... playing with colors. now, choosing a color means that we we will FOREVER have a (insert color) portfolio. which isn't that big of a deal until you think of yourself as a person who is choosing someone to like, RAISE YOUR BABY and you open the binder to see that they selected (insert your least favorite color in the world) as their main color!! aaaahhhh!!
*deep breath*
the pressure to please is overwhelming but NM and i have tried to just keep an open mind and remember that at some point this part of the process will be in the past and ill most likely be sleep deprived and kicking myself for whining about how hard it was to make a portfolio.
*fingers crossed that a birth-mom likes the color chartreuse!*
(just kidding. we didn't pick chartreuse)
Posted by Jersey at 2:36 PM 6 comments: 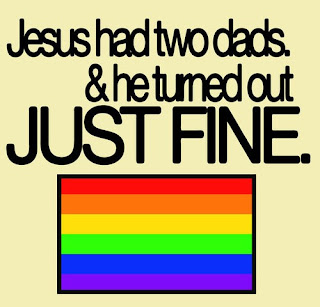 sometimes i day dream. i think about what it would be like to live in a world where i could do the simiple things that i took for granted when i was dating men. things like kissing while standing in line at the movies or holding hands when walking through the mall. i day dream about feeling safe going to my high school reunion with my partner and checking into hotels without having to deal with the "oh, im sorry... it looks like we accidentially gave you a room with only one bed" scenario.

sometimes i get real life glimpses of what it would feel like to live in a country where being gay was normal. a random brochure that includes the word "partner"... or an advertisement that contains two people of the same gender doing mundane things together (not to be confused with heteronormative commercials with people of the same gender doing things like eating yogurt or watching football while talking about the opposite gender).

i logged on to yahoo recently and saw that doogie howser md (neil patrick harris) is expecting twins with his partner. i felt so excited that there would be a front page story about a gay couple doing something so normal. i couldnt help but feel like i should be waiting for the punchline, the reason why they would have written an entire article about him. i thought... maybe it will refer to some law that is up for debate... or maybe some psychologist will weigh in with their opinion about the... *deep doctor voice*... "impact on the children"... or maybe the surrogate is somehow tied to a royal family... or... or... or...

but after reading the article i realized that there was no big political agenda. it was just an actor having a kid with the person he loves who also happens to be a dude. *shrug* no big fuss. i felt myself smile because it was a glimpse into the future when being gay...*brittney spears voice*.... aint gonna be no big thang, yall.

i read the comments.

now anyone who reads online articles knows that the  "comments" section is typically a no-mans land filled with the dregs of society who commonly spew hate under anonymous names like "freedom lover" or "patriot". *rolling my eyes* 10 times out of 10, anyone who lives in reality knows to not take these folks seriously.

but as i read through the comments, i was so struck by how... well, how normal.... these people seemed. lots of the comments came from folks with actual profile pictures next to their names. and although there were the predictable homophobic comments like "they just want to have a baby so they can stick the pacifier up their ass"....hardy har har... gay men like to stick things up their butts... how funny.... thank you for the 1980's gay bashing joke.

although there were a handful of truly hateful comments, many of the comments were from regular 'ol folk who said things like "i love gay people...." or "i have gay friends..." or "my sister/brother/uncle/cousin is gay and i love him/her...". i was overwhelmed how many comments indicated a personal connection with a gay person and then followed with... "BUT"

it felt like a blow to my gut. i just couldnt believe that such "normal" people were so damn homophobic.

anywhoo.. the point of this post is three fold. 1. congrats to doogie. 2. dont read comments after articles and 3. homophobia sucks.
Posted by Jersey at 1:04 PM No comments: