"she gave her baby up for adoption."
"are they natural sister and brother?"
"do you have any children of your own?"
"do you know your real mom?"

at some point in my life, i have no doubt said one or all of the above statements. like most things in life, my language was a reflection of my knowledge and understanding of the world around me. the more experience i have had with adoption however, the more i have grown to understand the importance of positive adoption language (PAL).

i first learned about PAL in our adoption class. basically, PAL is the choice to use language that frames adoption in a positive way rather than in a negative or second-option kind of way. a good example is the phrase, "gave the baby up for adoption" (which i have said countless times). without even knowing it,  using words like "gave away" unintentionally creates a feeling of  negativity. the phrase "give away" sounds cold, careless and inhumane..something a person does when they dont love something.

the reality of adoption however couldnt be farther from cold, careless or inhumane. birthmothers go through unbelievably selfless and painstaking moments as they create an adoption plan for their baby. they spend countless hours, often under stressful circumstances, to do their best to create an adoption plan that will be the best for their baby... even if it means emotional pain for them in the process.

to think of it from the perspective of the child... to say that someone "gave you up" feels like you werent valuable enough to keep. the reality though is that adopted babies are SO valuable, their birth families only wanted the best for them. the use of PAL means that the child wont hear "your birthmom gave you up" and will instead hear, "your birthmom chose an adoption plan for you".


Though in adoption parent and child are linked by love and by law, the fact that they are not connected by blood has often meant that some people are unwilling to acknowledge their relationship as genuine and permanent. Thus they use qualifiers (“This is Bill’s adopted son”) in situations where they would not dream of doing so in a non-adoptive family (“This is Bill’s birth-control-failure son” or “This is Mary’s caesarean-section daughter.”) They tend not to assign a full and permanent relationship to persons related through adoption (“Do you have any children of your own?” or “Have you ever met your real mother?” or “Are they natural brothers and sisters?”) They assume that adoptive relationships are tentative (“What if his real parents want him back?”)

now that i have begun to make a shift in my language its amazing to me how many blatantly negative messages i am starting to notice about adoption, birth mothers, and adopted kids. ive heard lots of "you were adopted" jokes, have had people make terrible assumptions about our birthmother's personal habits and have begun to notice how frequently the term "gave up" is used to describe the choice of adoption.

last semester one of my students (who was adopted at birth) said that she saw a book in the "comedy" section of the bookstore called "Breaking Bad News with Baby Animals". basically the book has tons of cute photos of baby animals with captions that help you break bad news to someone... like, "you're fired". she said that she flipped through the book and laughed at some of the captions. but then she came across this page... 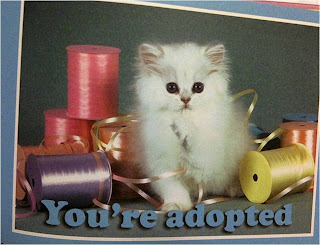 she was struck to read that being adopted would be included in a book about terrible news. she said "i know lots of people who have such shitty parents, it would be bad news for them to hear 'Sorry, you were NOT adopted'". lol. i love students.


anywhoo... the point of this post isn't to be the language police. its mostly to share that i am learning a lot about how our society frames adoption and am hoping that our family can be one of the small examples that helps create change. 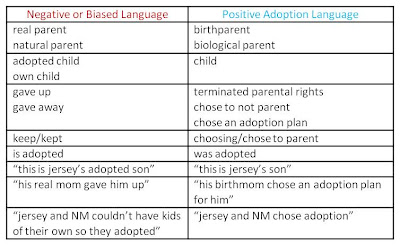 in other news, 2 days until the due date. getting so excited to meet him!!